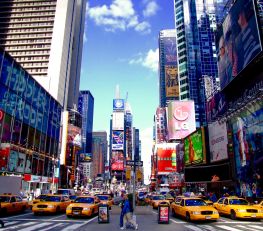 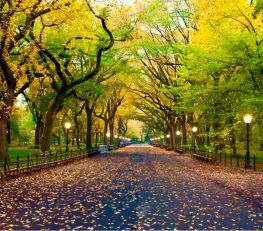 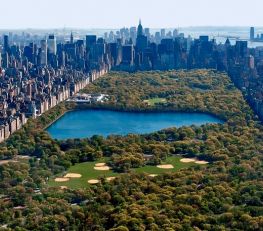 New York is the most populous city in the United States and the center of the New York Metropolitan Area, one of the most populous metropolitan areas in the world. New York exerts a significant impact upon global commerce, finance, media, art, fashion, research, technology, education, and entertainment. The home of the United Nations Headquarters, New York is an important center for international affairs and is widely deemed the cultural capital of the world. Located on one of the world's largest natural harbors, New York City consists of five boroughs which were consolidated in 1898: The Bronx, Brooklyn, Manhattan, Queens, and Staten Island.

Many districts and landmarks in New York City have become well known to its approximately 50 million annual visitors. Times Square, iconified as "The Crossroads of the World", is the brightly illuminated hub of the Broadway theater district, one of the world's busiest pedestrian intersections, and a major center of the world's entertainment industry. The city hosts many world renowned bridges, skyscrapers, and parks. New York City's financial district, anchored by Wall Street in Lower Manhattan, functions as the financial capital of the world and is home to the New York Stock Exchange, the world's largest stock exchange by total market capitalization of its listed companies. Manhattan's real estate market is among the most expensive in the world. Manhattan's Chinatown incorporates the highest concentration of Chinese people in the Western Hemisphere. Unlike most global rapid transit systems, the New York City Subway provides 24/7 service. Numerous colleges and universities are located in New York, including Columbia University, New York University, and Rockefeller University, which are ranked among the top 50 in the world.

New York City has over 28,000 acres (110 km2) of municipal parkland and 14 miles (23 km) of public beaches. This parkland complements tens of thousands of acres of federal and state parkland.

Tourism is one of New York City's most vital industries, with more than 40 million combined domestic and international tourists visiting each year in the past five years. Major destinations include the Empire State Building; Statue of Liberty; Ellis Island; Broadway theater productions; museums such as the Metropolitan Museum of Art; greenspaces such as Central Park and Washington Square Park; Rockefeller Center; Times Square; luxury shopping along Fifth and Madison Avenues; and events such as the Halloween Parade in Greenwich Village, the Macy's Thanksgiving Day Parade, the St. Patrick's Day parade, seasonal activities such as ice skating in Central Park in the wintertime, the Tribeca Film Festival, and free performances in Central Park at Summerstage. Special experiences outside the key tourist areas of the city include, but are not limited to the Bronx Zoo; Coney Island; and the New York Botanical Garden.
information taken from:
en.wikipedia.org/wiki/New_York_City

The Brooklyn Bridge is one of the oldest suspension bridges in the United States. Completed in 1883, it connects the New York City boroughs of Manhattan and Brooklyn by spanning the East River. With a main span of 1,595.5 feet (486.3 m), it was thelongest suspension bridge in the world from its opening until 1903, and the first steel-wire suspension bridge.
information taking from:
en.wikipedia.org/wiki/Brooklyn_Bridge

The South Street Seaport is a historic area in the New York City borough of Manhattan, located where Fulton Street meets the East River, and adjacent to the Financial District. The Seaport is a designated historic district, distinct from the neighboring Financial District. It features some of the oldest architecture in downtown Manhattan, and includes the largest concentration of restored early 19th-century commercial buildings in the city. This includes renovated original mercantile buildings, renovated sailing ships, the former Fulton Fish Market, and modern tourist malls featuring food, shopping and nightlife, with a view of the Brooklyn Bridge. At the entrance to the Seaport is theTitanic Memorial lighthouse.
information taken from:
en.wikipedia.org/wiki/South_Street_Seaport
www.southstreetseaport.com

Central Park is a public park in the center of Manhattan in New York City, United States. The park initially opened in 1857, on 843 acres (3.41 km2) of city-owned land. In 1858, Frederick Law Olmsted and Calvert Vaux won a design competition to improve and expand the park with a plan they entitled the Greensward Plan. Construction began the same year and was completed in 1873.
Designated a National Historic Landmark in 1963, the park is currently managed by the Central Park Conservancy under contract with the city government.
information taken from:
en.wikipedia.org/wiki/Central_Park
www.centralparknyc.org