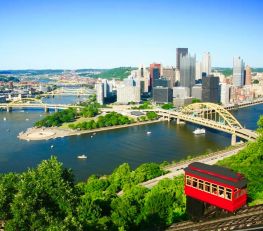 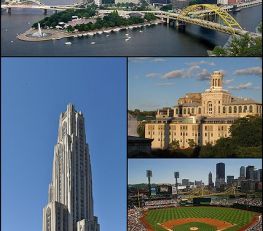 "National Geographic Traveler ranked Pittsburgh as one of the best places in the world to visit in its 2012 list of the Best of the World. Traveler sees something in Pittsburgh that you can too: our hometown spirit, great museums like the one honoring our own Andy Warhol, lots of fun things for families to do, great restaurants and places to stay...oh yes, and then there's our sports teams. What more can we say?"

In the 19th and 20th centuries, wealthy businessmen and nonprofit organizations donated millions of dollars to create educational and cultural institutions. As a result, Pittsburgh is rich in art and culture.

Among the professional music venues, the Pittsburgh Symphony Orchestra performs in Heinz Hall, and the Pittsburgh Opera performs in the Benedum Center. Both The Benedum Center and Heinz Hall provide venues for other groups, such as the River City Brass Band and the Pittsburgh Youth Symphony Orchestra. Pittsburgh has a long tradition of jazz, blues and bluegrass music. Additionally the National Negro Opera Company was founded in Pittsburgh, and was the first all African-American opera company in the United States. This led to the prominence of African-American singers like Leontyne Price in the world of opera. Pittsburgh has a number of small and mid-size arts organizations supported by individuals, local foundations, and the Allegheny Regional Asset District. Examples include Pittsburgh Irish and Classical Theatre, Quantum Theatre, the Renaissance and Baroque Society of Pittsburgh, and the early music ensemble Chatham Baroque.

Pittsburgh Dance Council and the Pittsburgh Ballet Theater host a variety of dance events. Polka, folk, square and round dancing have a long history in the city and are celebrated by the internationally famous Duquesne University Tamburitzans, a multicultural academy dedicated to the preservation and presentation of folk songs and dance.

Pittsburgh museums include the Andy Warhol Museum, the Carnegie Museum of Art, the Frick Art & Historical Center, Pittsburgh Center for the Arts and the Mattress Factory. Installation art is featured outdoors at ArtGardens of Pittsburgh. The Carnegie Museum of Natural History has extensive dinosaur collections and an Ancient Egypt wing. The Carnegie Science Center is technology oriented. The Senator John Heinz Pittsburgh Regional History Center and Western Pennsylvania Sports Museum are located in the Strip District. The unusual and eclectic Bayernhof Music Museum is six miles (9 km) from downtown. There is a quarterly Gallery Crawl in the downtown area's cultural district that is free and open to the public to enjoy the local art scene as well as the Three Rivers Arts Festival, which takes place in the same downtown area annually during the summer. Pittsburgh is home to a number of art galleries and centers including the Miller Gallery at Carnegie Mellon University, and the Wood Street Galleries

The city is also served by the Pittsburgh Zoo and PPG Aquarium, Phipps Conservatory and Botanical Gardens, and the National Aviary.