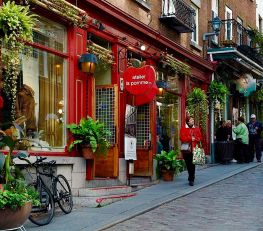 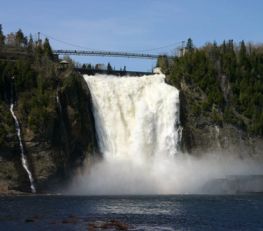 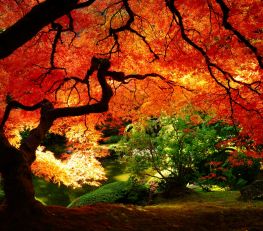 Quebec City or Québec City (French: Ville de Québec) is the capital of the Canadian province of Quebec and is located within the Capitale-Nationale region. It is the second most populous city in Quebec after Montreal.

The narrowing of the Saint Lawrence River approximate to the city's promontory, Cap-Diamant (Cape Diamond), and Lévis, on the opposite bank, provided the name given to the city, Kébec, an Algonquin word meaning "where the river narrows". Founded in 1608 by Samuel de Champlain, Quebec City is one of the oldest cities in North America. The ramparts surrounding Old Quebec (Vieux-Québec) are the only remaining fortified city walls that still exist in the Americas north of Mexico, and were declared a World Heritage Site by UNESCO in 1985 as the 'Historic District of Old Québec'.

The city is a major cultural centre of the French-speaking world, as well as an important tourist destination. Various festivals are held annually including the Summer Festival, and Winter Carnival. The city's most famous landmark is the Château Frontenac, a hotel which dominates the skyline. The National Assembly of Quebec, the Musée national des beaux-arts du Québec (National Gallery of Quebec), and the Musée de la civilisation (Museum of Civilization) are found within or near Vieux-Québec.

Much of the city's most notable architecture is located east of the fortification walls in Vieux-Québec (Old Quebec) and Place Royale. This area has a distinct European feel with its stone buildings and winding streets lined with shops and restaurants. Porte St-Louis and Porte St-Jean are the main gates through the walls from the modern section of downtown; the Kent Gate was a gift to the province from Queen Victoria and the foundation stone was laid by the Queen's daughter, Princess Louise, Marchioness of Lorne, on June 11, 1879. West of the walls are the Parliament Hill district and the Plains of Abraham.

The Upper Town is linked by the Escalier «casse-cou» (literally "neck-breaking" steps) and the Old Quebec Funicular to the Lower Town, which includes such sites as the ancient Notre Dame des Victoires church, the historic Petit Champlain district, the port, and the Musée de la Civilisation (Museum of Civilization). The Lower Town is filled with original architecture and street designs, dating back to the city's beginnings. Murals and statues are also featured. The Lower Town is also noted for its wide variety of boutiques, many featuring hand-crafted goods.

Quebec city's downtown is on the lower part of the town. Its epicentre is adjacent to the old town, spanning from the Saint-Roch district, throughout the Saint Sauveur, Saint-Sacrement and Limoilou quarters. Some interpretations consider Quebec's Down town to be the central southern portion of the town ranging from the old city and Saint Roch, all the way west to the Quebec city Bridge.

Quebec City's skyline is dominated by the massive Château Frontenac Hotel, perched on top of Cap-Diamant. It was designed by architect Bruce Price, as one of a series of "château" style hotels built for the Canadian Pacific Railway company. The railway company sought to encourage luxury tourism and bring wealthy travelers to its trains. The hotel is beside the Terrasse Dufferin (Dufferin Terrace), a walkway along the edge of the cliff, offering beautiful views of the Saint Lawrence River.

Tourist attractions located near Quebec City include Montmorency Falls, the Basilica of Sainte-Anne-de-Beaupré, the Mont-Sainte-Anne ski resort, and the Ice Hotel. Jardin zoologique du Québec, reopened in 2002 after two years of restorations but closed in 2006 after a political decision. It featured 750 specimens of 300 different species of animals. The zoo specialized in winged fauna and garden themes, but also presented several species of mammals. While it emphasized the indigenous fauna of Quebec, one of its principal attractions was the Indo-Australian greenhouse, featuring fauna and flora from these areas.

Parc Aquarium du Québec, reopened in 2002 on a site overlooking the Saint Lawrence River, presents more than 10,000 specimens of mammals, reptiles, fish and other aquatic fauna of North America and the Arctic. Polar bears and various species of seals of the Arctic sector and the "Large Ocean", a large basin offering visitors a view from underneath, form part of the principal attractions.

There are a number of historic sites, art galleries and museums in Quebec City, such as Citadelle of Quebec, Musée national des beaux-arts du Québec, Ursulines of Quebec, and Musée de la civilisation